You may have heard of the famous 'Gin Drinkers Line' used during the Second World War as a defensive line across Kowloon, but just how much did Gin actually have to do with it?

The defensive line was built in the 1930’s by the British specifically to stop potential invasions from the north, made up of a string of trenches, pill-boxes and bunkers as well as the Shing Mun Redoubt (or underground fortress) which were the headquarters for the area. Designed to house 150 troops but manned by a mere 30-40, it was easily overrun. The entire line turned out to be poorly designed and ineffective after a couple of days, and the fall of Gin Drinker’s Line gave the Japanese complete control of the Shing Mun Reservoir, signalling the end of Kowloon as far as the allied forces were concerned. Only 2 weeks later the British surrendered Hong Kong Island to the Japanese, on what we know as ‘Black Christmas’ December 25, 1941.

What a lot of people don’t know however, is the story behind the ‘Gin’ in the name. The Gin Drinkers Line settled across Hong Kong from east to west, starting at an inlet called Gin Drinkers Bay, in Chinese, 醉酒灣 literally: “Drunkard Bay’ (which is now Kwai Chung) used as a harbour for Tanka fishing junks. 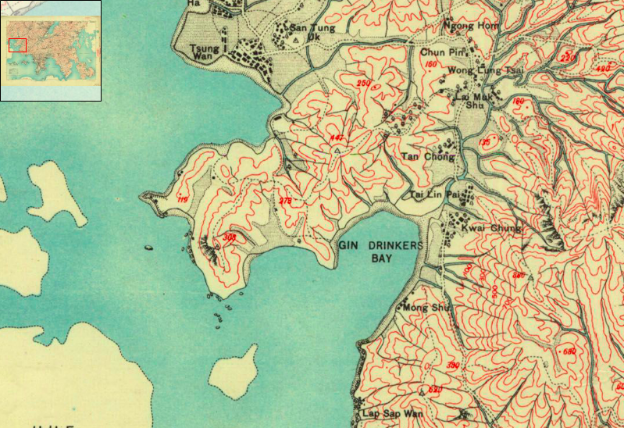 According to Denis Bray’s accounts of Hong Kong in the 50’s, the Bay was colloquially named after the extravagant launch parties for new ships that used to take place in the bay, long before the wars started, and because it was a popular spot for the rich to throw their boat parties. That is until its slow yet inexorable transformation into a refuse landfill, earning it another less fun nickname, Lap Sap Wan,  垃圾灣 literally: "Rubbish Bay". 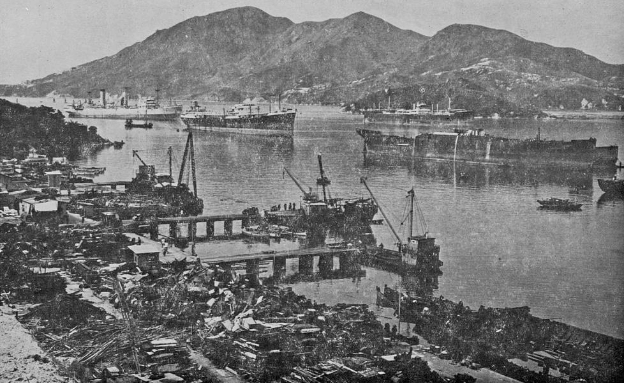 The beginning of the landfill

Authorities finally took control of the area, and it was completely reclaimed in the 60’s to eventually become what we know as Kwai Fong and parts of Kwai Hing.

There is one great story from Gin Drinkers Bay that happened a few years prior to the wars, in 1926, when police detectives reportedly thwarted the planned kidnapping of a distillery owner.

Records don’t really say whether this particular distillery was actually making gin, even with it situated at the head of Gin Drinkers Bay, but the tale goes that Detective Sub-Inspector Ken Andrew, in charge of the South Kowloon CID and Water Police,  hid with a party of detectives in ambush inside the distillery.

Six robbers landed from a junk, apparently running quickly into the building and managing to surprise the hidden detectives. The gun-toting leader of the gang first came across Sub-Inspector Ken Andrew firing two point-blank shots at him, before being shot dead in a return volley. Three of the gang were also shot dead in the operation, with one being captured and the one remaining escaping into the sea to either swim away or possibly drown.

After the case settled, tests were done on the ammunition from the gang-leaders gun revealing that 2 of the rounds happened to be defective, luckily the only two rounds fired at Sub-Inspector Ken Andrew. 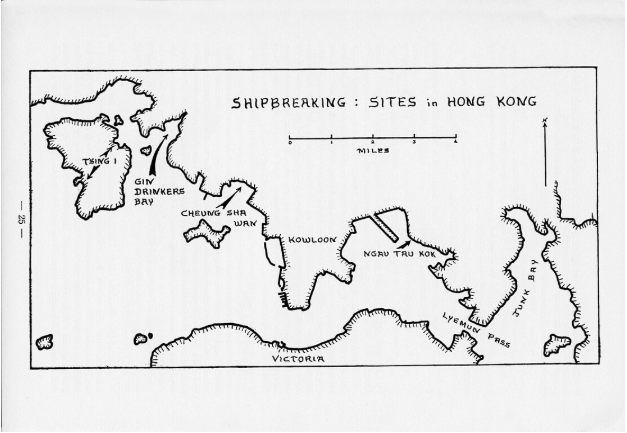 You can still hike up to see remains of the concrete tunnels, pill-boxes, bunkers, machine gun posts, artillery batteries and trenches spread along the hills in Kowloon. Take a minibus from Tsuen Wan arriving at Shing Mun reservoir or a Taxi higher up to near the BBQ site next to the exit/entrance of the MacLehose section 6.